Just a quick update. One of my photos, “Cricket at Coogee Oval”, won a photo competition last week. I entered it in the Randwick Petersham Cricket Club’s photo competition a little while ago and found out last week that it won first place.

There was a small presentation on Sunday morning at Coogee Oval hosted by Mike Whitney, the former NSW and Australia fast bowler and RPCC President, and my mother took the photo above as I accepted my prize, a Canon SX40 camera and a certificate signed by Mr. Whitney.

It was a really nice presentation and it was a thrill meeting Mr. Whitney, who was one of my favourite cricketers during the late 80s and early 90s. It was great meeting the other finalists as well; all the photos were of very high quality and I was very impressed. To be honest I’m amazed I won – I was just happy to make the final ten and didn’t think I had much chance of winning at all, so it was a nice surprise.

It meant a lot to me as well as the last few weeks have been a bit of a nightmare for my family. I’ll explain more in another post soon but we’ve had a very, very traumatic couple of weeks and getting this news came at just the right time to ease some of the burden.

So I am very grateful for that and thank you to everyone at the RPCC and Canon for running such an enjoyable competition and hopefully it will go from strength to strength each year. 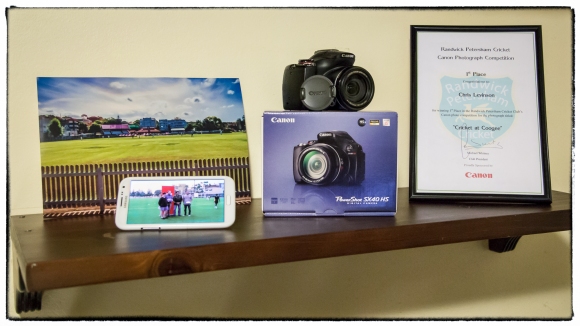 I took a quick photo of the camera once I’d unboxed it as well, so I thought I’d post that as well. It looks like a great camera so I can’t wait to try it out properly this weekend. 🙂